Dodecophonic composition and analysis has never been easier.

Twelve Tone is a powerful tool for serial composers and analyists. Hear and watch your rows (or sets) played and animated on the staff and piano keyboard.

When creating or editing rows, Twelve Tone lets you know if any notes are repeated by highlighting both notes, checking enharmonic values regardless of octave or accidentals.

Derive rows using Hexachords, Tetrachords or Trichords with the touch of a button. Color blocks in the notation, as well as in the magic square, help keep track of the different groups.

Unlock the row to change individual pitches, lock it to transpose the entire row.

When unlocked, simply touch the note on the staff to change its pitch. Once selected, touching the keyboard changes that note's pitch.

When locked, touching the staff or keyboard transposes the entire row.

Rows may contain from 1 to 12 notes. When you save them, you save the current state of the app, complete with name and current P, R, I, RI matrix markings. Saved rows appear in a list with their name and midi numbers to help you identify them. To update a row, load it, work on it and save it. Then delete the old one, or keep it as an archive. Edit the name of the currently loaded row by simply touching the name on the blackboard. Edit the names and order of your saved rows in the popup list by using the edit button at the top of the popup window.

The current state is automatically saved between launches.

Select what form(s) of the row you want played (once or looped).

Each sequence can be repeated and transposed over a five octave range. Two octaves below to two octaves above the written row.

You can also select the direction you want the octaves to play.

You can change all of these parameters at any time.

The rhythmic pattern waits to change until the beginning of the next loop. Form changes happen instantly and reflect the current state of the row, so if you change the root note, the Inversion, which may be playing, will reflect the new Inversion values.

Matrix Audio! Hear the pitches as you mark them in the matrix square. The marks indicate the row form in which the pitch belonged; Prime, Inversion, Retrograde, and Retrograde Inversion.

Lock the matrix to avoid accidentally marking or unmarking notes, and erase the entire square with the touch of a button. (You will need to unlock the button first.)

Lock the prime row and transpose it to C to use the Absolute Pitch Method for row labeling in the matrix.

Two fun interfaces to work in; black on white, or chalk on a chalkboard.

Comes preloaded with the following rows: 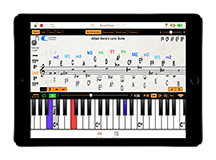 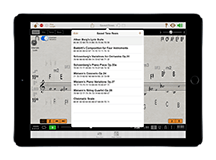 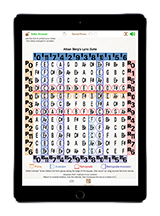 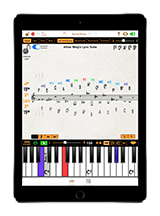 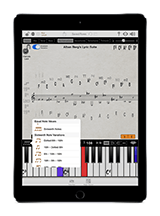